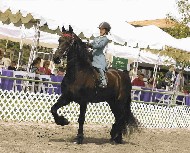 This is another of our rare FINDS from past Stallion Shows...BIG, BRAVE, HANDSOME, STER gelding. Steffan wowed the Judges with his movement, and was selected TWICE, in 2000 and 2001, to attend the Central Inspection (90 day stallion testing in Drachton)!!!! And in 2001, he was the LAST STALLION at the central testing to leave, and all the remaining horses became APPROVED STALLIONS. This guy has what it takes to nearly be an Approved Friesian Stallion. Now Steffan has substantial training both under saddle and being driven. Steffan has moved up the dressage ranks, first competing at A Level, then B, then L1, and L2, and now he is showing and winning at M level [2nd level], with points in M level to prove it. He is a sensitive dressage horse, whip and spurs are not necessary. All his lateral work is confirmed. He even has considerable experience out on the trail and in traffic. His pedigree is also unbelievable..unbroken STER predicates through-out. His motherline is STER-STER+ Pref-STER-STER. Steffan has a great future ahead of him. He enjoys dressage and he is GOOD at at. He has a very sweet character and is ALWAYS willing to work. Now he is ready to take someone to the TOP in dressage, in the United States. Steffan has a recent vet report and clean X-rays. This jet-black horse is kind, giving, non-spooky, and he WANTS to please. He has 3 good gaits, a FANTASTIC canter,and shows fantastic potential for upper level dressage. He measures 16 1/2 hands. Steffan has a fabulous disposition, and can be ridden by all levels of riders. He would do well as your new competitive dressage horse, but also he loves to go on relaxing trail rides/hacks. We like Steffan's wonderful training attitude. He is eager to please, and has a quiet and easy attitude. He is very easy to handle, and would also be suitable for beginning riders. Steffan is one of the nicest Friesian dressage geldings on the market today.